This has been quite a week filled with surprises and reasons to be optimistic. We’ve received notice on two good sized projects that we’ll be receiving PO’s shortly. I don’t usually go around bidding shopping center buildouts and other highly competitive projects for a lot of reasons, but mainly because they don’t meet our goals. The main goal of Amerivet Services is to solve problems that most companies can’t or won’t, and that’s what these two projects are about.

As the week progressed and I had a little time to look back on the year, I realized that most of the goals I set in place back in 2010 have been met. Some of those goals, such as “solving problems,” are ongoing and we’ll continue to meet those goals. There are other goals that I never dreamed would be met after last winter took a chunk out of us, and yet I can say we’ve semi-gracefully recovered in such a way that quite a few long-term goals have been met.

I’ve realized that a transition is due for quite a while now, and it looks like that transition will have to come in the next few months. We’ll have to do new strategic planning and set new goals in order to meet the new flow of work that is likely coming as a result of five years’ worth of effort.

So why does it take five years to see the fruits of effort? Well, it does and it doesn’t. Some effort can bring results right away, like completing a project, seeing a customer’s smile, and getting paid. Other effort takes a while, like successfully completing several small projects for a customer until they have a level of confidence that you can handle larger ones. Of course, it takes more than one customer to make a business roll, so this process has to be completed thousands of times. Every single time the direction of the process has to be aimed at a goals, or several goals, in order to keep the business moving in the desired direction. Without goals it’s easy to get distracted and end up doing work that has no benefit to the business as a whole.

Having goals and aiming for them are important, but without buy-in from customers, vendors, employees, and MY WIFE, none of them would be achieved. Everybody has to understand what the point is, and be willing to participate in that. Luckily I’ve had exceptional support from all those entities over the last five years.

As Amerivet Services enters its busiest time of the year it’s time for me to establish new goals. Goals that augment the old ones and keep us on a path that will keep our old customers happy while bringing new ones. It’s time for me to set a deadline for having some new goals, and a deadline for implementing the path to them. That’s hard to nail down, but I would say that by the end of December the winter will define itself to me, and I’ll have an idea of what’s achievable for the coming year. We’ve been through some tough times and overcome some big challenges. I imagine new challenges are coming, and I’d like to be ready.

For this week’s parting shot, check out what sunset at Amerivet Services looks like: 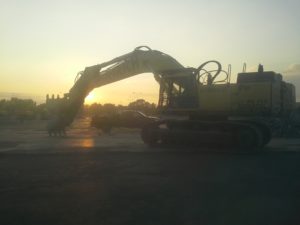