I was taught from a very young age to think differently from most people.  Essentially I was taught that nothing is impossible.  You just have to figure out HOW.  As I’ve grown and matured, I’ve learned the answer is almost always looking right at me.  The impossible WANTS me to do it!

A huge case in point has been the amazing opportunity that Amerivet Services has been given with the Wayne State University project.  We were initially invited to work on this project because no one else would take it on.  It was just too “different.”  Well, that’s typically my rallying cry.  If a project is challenging, unique, or different, then I’m in!

Since August 9th last year, the Amerivet Services team have kicked “impossible” situations in the butt, over and over…and done it quickly and ahead of schedule. Two weeks ago, we took on a portion of another contractor’s work, just because their people were intimidated by the level of difficulty.

Another thing that’s happened over the last 11 months, is that I’ve had a continuous project big enough for me to filter some people through the strainer and have a great team float to the top!  It’s not a big team, but they’re exactly the kind of people I want on my team.  They think like me, which is a little scary.  But the cool part is, they’re talented, smart, and courageous.  They like getting creative and kicking challenges in the butt.

This week, we were presented with what I see as a true testament as to what we’re made of:  Three beams across the top of an elevator shaft needed to be raised four inches.  There was nothing above or below to lift them with, the heat index was going to be 105 degrees, and it needed to happen on a holiday weekend.

Quite honestly, none of us wanted to do it.  We had spent the last two weeks pulling out the stops and working like crazy for other tasks, and I was dead set that the guys were weeks past due for a weekend with their families.

In the end, it was made evident to us that nobody else would or could do the work, and there was an urgent need that couldn’t wait til Monday.  Long story short, we found a way to take it on.

We talked back and forth about how to pick those beams up with nothing to hook to, and developed a good plan, along with plans “B” and “C.”  I got resources together for the guys, along with backup resources, and they insisted they could handle it.

And handle it they did!  It was a very long Saturday, but in the end, the beams lifted themselves and the day was saved!

I’m very proud to have a team that thinks like me and can prove it.  I’m looking for more challenges to keep them busy, so if you see something that nobody else can do, call me and let’s talk about it!

….And don’t forget, I do pay finders fees for referrals!

For our parting shot, check out this picture of Tory working on a beam at the top of a 120 ft. elevator shaft: 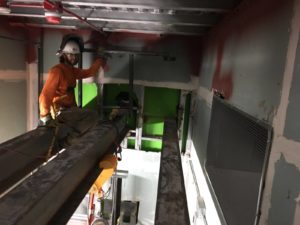