The morning of April 30, 1983, at “0500,” I experienced something I had never experienced before. It wasn’t completely unexpected, but it shook my young 17 year old psyche to the bone.  I had raised my right hand and enlisted in the Air Force the day before. After a long plane ride to San Antonio followed by a crazy bus ride to Lackland AFB, I had spent the afternoon and evening learning how to do things like pick up and put down luggage in unison with 51 other quivering young guys that magically would be “men” six weeks later.  We all went to bed that night with exhausted bodies and the hair we would lose the next day.

Then, at 0500 (that’s 5:00 AM) the next morning, we were awakened by the sound (and feel) of a steel trash can being thrown down the corridor between the beds, banging into most of them as it went!  As heavy a sleeper as I was at that age, that trash can did a good job of getting my attention!  Then, the stream of insults and profanities that followed it made the trash can seem like nothing.  It was a time to either stand up and meet the challenge, or crawl in a corner and shake like a leaf.  Of course, I’m not one to lay in a corner shaking, so I had no choice but to meet the daily challenge.  Yup, this was going to change my life, whether I liked it or not!

Every morning for the next 44 days, that trash can served both as my alarm clock, and my reminder that I had willingly volunteered to endure this, and whatever other abuse might be directed toward me.  Yes, I was definitely going to be a man with a new outlook by the time that trash can was finished with me!

Metaphorically speaking, it wasn’t the first time a trash can had been hurled at my attitude.  My dad was (and sometimes still is) very good at finding trash cans of his own to make me think about.  It’s rare for him to let me get away with thinking about nothing.

As I’ve gone through life, many challenges have come my direction, and quite a few of them have been like that trash can.  They come at me out of nowhere, but each one has a set of lessons and ways to build my confidence.  I’ve learned to love new challenges and the lessons they bring.

The end of July last year, I got a call from Chris, and he asked me to come by his office to look at a set of blueprints.  He emailed the prints to me so I could do some homework, and asked me to start thinking about what little corners of the welding scope would look like.  He came across like maybe some of the work would be up my alley, but I don’t think he was sure of the scope at the time.

I did my homework and went to his office the next week, and started going through the prints with him. I could feel him getting a little tense as I explained the various aspects, and then Dave joined us to learn what we were discussing.  Next thing I know, Dave’s calling Travis. Less than 30 minutes later, I was told that 8 days from then we were starting work, so I needed to put together a crew and equipment to make it happen!  A HUGE trash can had just been rolled through my life….

On August 9th, we started work on the Anthony Wayne Apartments at Wayne State University.  It’s essentially three connected buildings that will consist of over 400 apartments along with commercial space.  We’ve met a lot of trash cans head on in the last 10 months, and the project is going really well!  By this time next month we should be wrapping our portion of it up.  Many thanks to Dave, Chris, and Travis!

As I begin to move the team past the Wayne State Project, I really do need some new challenges.  As you all know, I love unique projects and unique challenges.  Believe it or not, my team likes this crazy stuff too!  The explosive growth Amerivet Services has seen in the last 18 months has been unbelievable, and we’re all ready for the next step, the next adventure.

We need enough medium to large projects to keep 5-8 welders (and more if necessary) working in the field.  We want good, unique projects, and we’re not excited about working in the shop.  Offsite work is where it’s at for us.

If you know of upcoming projects that might be of interest to us, PLEASE point me to them!  I pay finders’ fees for good leads, and I won’t even make you sell the work.  Just point me to the lead!

Many thanks for the words of support and rolling trash cans over the years!  Plenty of thanks to Staff Sergeant Page and my dad, for making me understand that a “trash can” coming at you isn’t necessarily a bad thing.  Happy Father’s Day to you both!

For our parting shot, check out this picture of Tyler welding a support across the elevator shaft at Wayne State! 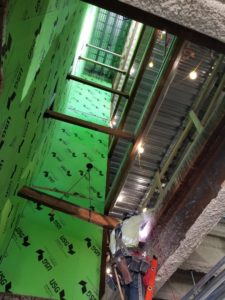