Several months ago, I had a guy bring me a table extension from an old antique table saw. It was cast iron, and yes, it was a challenge to repair. However that’s not the real story. The real story is that he’d had someone weld a patch over a leak in his air compressor tank. Then sometime later, without any warning, that air compressor tank ruptured under pressure, and bounced around his shop like a rubber balloon, destroying everything in its path….including that poor little table saw extension.  Luckily, no humans were damaged in the making of this story!

Today’s blog isn’t about the blah blah management of blah blah this or that. Its about what happens when you get desperate to save 20 bucks and convince somebody to come do something that shouldn’t be done in the first place. There are a million ways for this to happen in the welding world, and that’s why insurance for companies that do welding is so high priced. If you’re in the welding business, you really should know a million other things, and how simply striking an arc can affect them.

So, on to my next story, and you’ve seen it on Gary’s Blog before: A crane with a grapple swings around and hits its own fuel tank, ripping a hole in it. The project manager calls a guy like me (well, not really because he’s dead), and has him come out to repair the tank. He has to fight with his welder to get it working, and then finally strikes an arc on the fuel tank though he might have forgotten a few things while fighting the welder.  Next thing you know, he and three other people on the job site are subjected to about 3 minutes of war-like carnage while that fuel tank blows up and those on a few other pieces of equipment blow up in its honor. It really is/was just a case of a guy breaking some cardinal rules about welding that aren’t necessarily taught in welding school, and aren’t necessarily backed by insurance carriers…..BUT seem to happen every day in this country regardless.

You see, there are semi-safe ways to weld SOME fuel tanks with minimal risk, but if you’re distracted by other issues and you leave a step out, well you’ll get a reminder of that step while you’re climbing the Stairway to Heaven.

Welding is serious business. It’s rough, tough, and very risky. There’s everything from burns, lesions, and eletrocution, to explosions and shock and awe to worry about. Ever wonder why, after 21 years in the military, I really love this business? It really is an opportunity to do things for people that nobody else will do, take a (hopefully well thought-out) risk or two, and save the day for someone.

So….uh….Gary! How many old welders do you know? Quite honestly, not as many as I’d like to. I have a great uncle who welded stainless most of his life. He lived to be reasonably old. Nowadays OSHA would claim he had been exposed to Chromium-6 too much, but who knows. He beat the average by a fair amount, so maybe the fact that he worked in buildings with open doors in Texas saved his life. He didn’t go out with a kaboom so I believe he was a pretty smart welder.

The thing about the welding world is that “US” welders are always presented with situations where we’re expected to cure ills that nobody else can.  There’s an expectation that “it’s a simple 2 minutes worth of work” from the customer’s point of view. The problem for us is, it’s hardly ever a simple 2 minutes worth of work. If you’re in this business to solve real problems, you’ll quickly find out that if you’re not knowledgeable of all sciences, then all of the sciences you don’t know will kick you in the butt in catastrophic ways. Obviously the first will be the recipe for fire:  You know, oxygen, heat, and fuel. In the welding world, we spend most of our time managing that recipe like a chef trying to manage perfect cordon bleu.

Another recipe we work with is corrosion: Heat, oxygenators, and time.  Why do all of the good recipes have three components? I don’t know. Ask my daughter, the chef!

Meanwhile, please understand that I spend a lot of my time working to understand the science behind my actions, and the consequences thereof.  When you ask me to solve your problem, you can rest assured that I will weigh your situation against the multiple factors that might become consequences, and give you the best possible answer. If there are open questions I’ll find people that can answer them, and in the end your problem will be solved as safely and permanently as possible.

So get with it! Call us before your problem grows even bigger! 2017 is THE year to get things under control and make the US economy something to brag about!

For our parting shot, check out this revolving door frame that I took apart, 1000 lbs at a time, without hitting the building or having “kaboom” mentioned in my obituary: 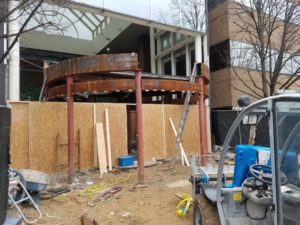